Dmitriy Soliannikov was the best in Sanok

Dmitriy Soliannikov turned out to be the best in the first European Individual Ice Speedway Championship. The Russian was second to none and never once was he forced to watch his rivals’ backs on the track in Sanok.

His compatriot Vladimir Fadeev finished the competition on the second step of the podium, and the experienced Austrian Harald Simon on the third. The Pole, Michał Knapp, was 12th. The second and last final European Individual Ice Speedway Championship tournament is scheduled for March 19 in Tomaszów Mazowiecki. 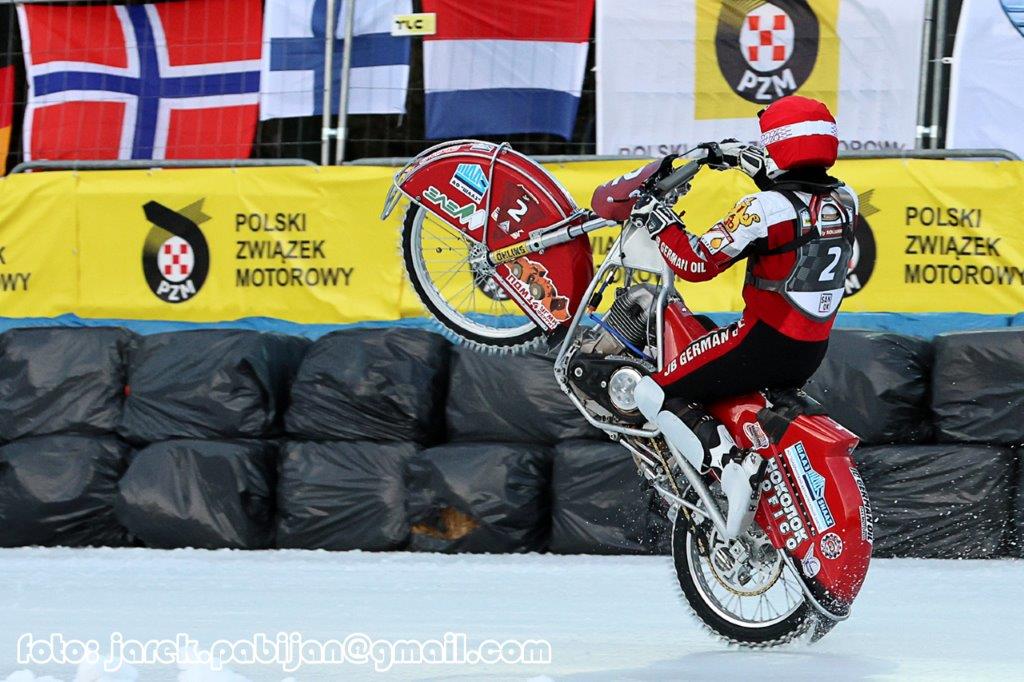 The competition on the “Błonie” track was held in sunny weather and enjoyed considerable interest among fans who saw a lot of interesting races. It was undoubtedly a successful return – after an eight-year break – of the ice speedway to Sanok.

Soliannikov already showed during Friday’s training that it will be difficult to win with him. In the competition, the European champion from 2020 drove confidently and far ahead. He recorded a set of three-pointers and he will play the role of an absolute favorite for gold in the second IME finals, which will be held in Tomaszów Mazowiecki on March 19 in Tomaszów Mazowiecki.

– In Russia it is certainly more difficult to score points, but I am happy to come to compete on tracks in Poland. I can say that I “rest” here on the straight. Before the second tournament my situation is certainly comfortable, but you also have to do your job in a month’s time to regain the gold medal – said Soliannikov.

His compatriot Vladimir Fadeev also showed good results in Sanok. The gifted Russian only lost to his compatriot. The experienced Austrian Harald Simon, who as usual impressed with his stylish driving, came third. His duels with the representative of Italy, Luca Bauer, were one of the most interesting during the entire competition. Bauer, who was fourth in the final, impressed with his bravery and deliberate attacks.

– In the decisive start my bike lacked the power to fight for something more. However, I felt good at the track in Sanok, the geometry of which suited me very well. In Tomaszów Mazowiecki I will try to make up for the losses and fight for the medal – said Bauer.

Jasper Iwema was also doing great. The Dutchman of Polish origin, supported from the stands by his family, had 10 points on his account after 4 series and understandable hopes for a place on the podium. Unfortunately, he did not perform well in his last race and play-off.

– The reason was poor starts. Nevertheless, there are still chances for a medal and with this attitude I will go to Tomaszów Mazowiecki in a month – said Iwema.

The Polish representative, Michał Knapp, came in twelfth position. He scored the first point as a result of Simon’s fall, but in his last performance he added a “three”, arousing applause from the audience after he successfully fought for a win against the reserve on Saturday with Finn Rami Systa, with whom he hugged hard after going to the park of machines.

– During training I had problems with the clutch, but we sat until late hours to fix everything. It was different during the competition, but I’m sure I’m happy with the won race – said Knapp.

Unfortunately, there were some falls during the competition. The most dangerous in the tenth race were Fadeev, Aki Ala-Riihimaki and Daniel Henderson. The latter, who had to be taken to hospital, suffered the most. Frank Zorn also retired from the competition. This was due to a collision caused by Jimmy Olsen in the 11th Race.