Representatives of ten countries will start in Sanok!

For two days – February 25 and 26 – the competition for the European Individual Ice Speedway Championship medals will take place in Sanok. On the “Błonie” track, the start of the first race is scheduled for both days at 2.00 pm. FIM Europe sent invitations to participate in the event to 10 national federations. 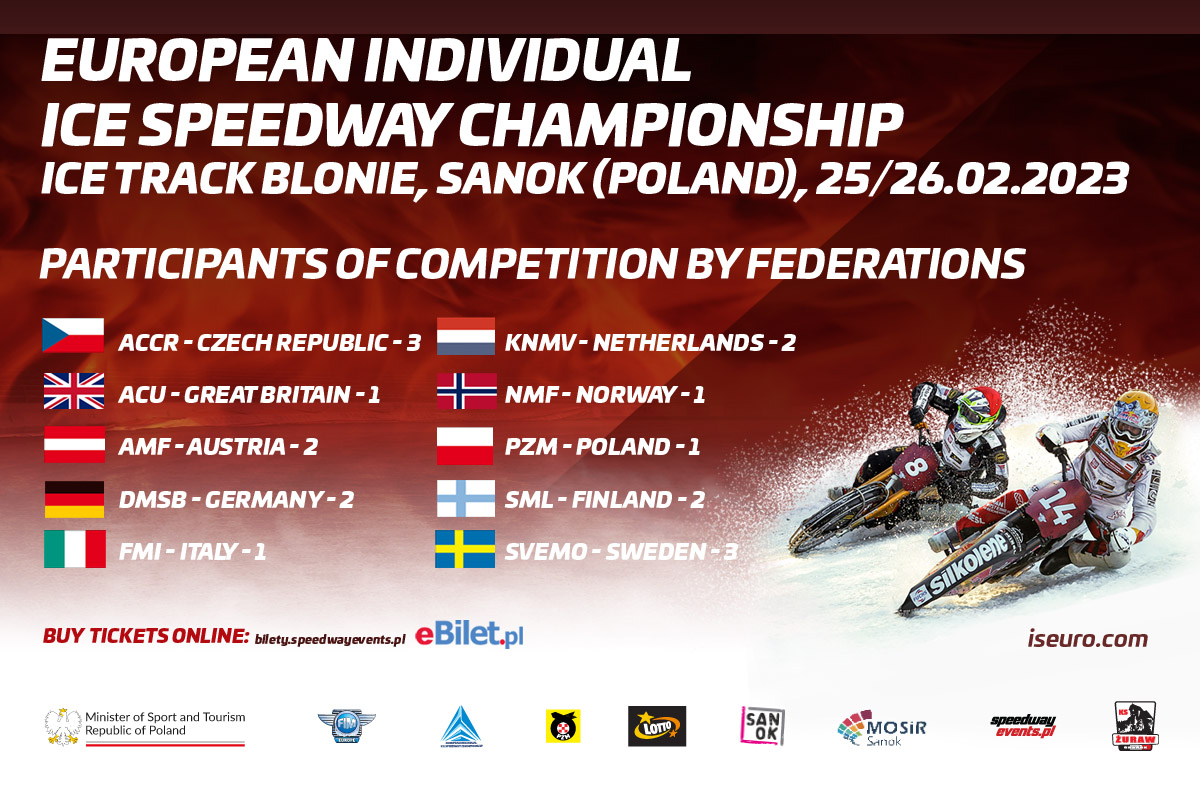 A year ago, Sanok again hosted the participants of the Individual European Championships, when the first of two final tournaments took place. The return of ice speedway to this city turned out to be very successful. Fans and sports level added.

This season there will only be a fight for medals. And it’s in the classic two-day edition, and the final order will be decided by the total sum of points won in both tournaments. The gold medal was won a year ago by Austria’s Harald Simon, ahead of Luca Bauer (Italy) and Jimmy Olsen (Sweden) in the general classification.

There is still some time to announce the cast of the competition, but the division of 18 places (including reserve riders) for individual federations is already known. Representatives of ten countries are to present themselves in Sanok.

Three places each (two in the tournament and one for the reserve) were awarded to the Czech Republic and Sweden. Two riders each will represent Austria, Germany, the Netherlands and Finland. Finally, one each for Great Britain, Italy, Norway and Poland.

Individual federations were also assigned starting numbers. It looks like this: 1. Finland, 2. Poland, 3. Germany, 4. Italy, 5. Czech Republic, 6. Sweden, 7. Netherlands, 8. Sweden, 9. Austria, 10. Norway, 11. Finland, 12. Czech Republic, 13th Netherlands, 14th Great Britain, 15th Austria, 16th Germany, 17th Sweden, 18th Czech Republic. The European Individual Ice Speedway Championship will be held in Poland for the fourth time in a row. Our country will traditionally be represented by Michał Knapp, who is climbing up the European hierarchy every year. In 2020 he was thirteenth, a year later twelfth and most recently eleventh overall.

The competition formula remains unchanged. It provides for 20 races in the main phase, after which the two most effective competitors will immediately find a place in the final race. The fight for the remaining two will take place in the play-off, to which riders from places 3-6 after the main phase will stand. The sum of points won in two tournaments will determine the final classification, and thus this year’s medalists.

Tickets for the event in Sanok are on sale. Ticket packages for two days with the ice speedway on the “Błonie” track have been prepared, you can also buy tickets separately for each day. Tickets can be purchased on the website bilety.speedwayevents.pl and on the ebilet.pl website.

VIP (included in the price: parking space, high-class catering, a set of gifts, a seat with the best visibility on the grandstand, competition program)

PLN 79 – concessionary (children and youth from 7 to 18 years of age; pensioners)

PLN 59 – concessionary (children and youth from 7 to 18 years of age; pensioners)

VIP (included in the price: parking space, high-class catering, a set of gifts, a seat with the best visibility on the grandstand, competition program)

PLN 49 – concessionary (children and youth from 7 to 18 years of age; pensioners)

PLN 39 – concessionary (children and youth from 7 to 18 years of age; pensioners)

Tickets are also sold at selected stationary points throughout the country. Their list can be found HERE. On the day of the competition, from 11.00, tickets and programs will also be available at stationary stands around the facility. Tickets are valid both in paper and electronic versions (on a mobile device).

Tickets for the disabled: The organizers have prepared a pool of free tickets for disabled fans. If you are interested, please apply – by February 19 – at the following e-mail address: events@speedwayevents.pl, with “Ice Speedway ticket” in the subject line. The condition for receiving a free entry ticket will be sending a copy of a document proving a significant degree of disability. Free admission is granted to both the disabled person and their guardian. Note – the number of places is limited!